with pH-dependent binding affinity to avidin or streptavidin [Read more]

Diethylenetriaminepentaacetic acid (DTPA), also known as pentetic acid, is a chelating agent and capable of forming extremely stable complexes with metal salts. DTPA is an aminopolycarboxylic acid composed of a diethylenetriamine backbone with five carboxymethyl groups.
DTPA has a strong affinity for metal cations with large ionic radius. In addition to various heavy metal ions, the slightly smaller iron ions can also be bound efficiently.
Assuming that each nitrogen atom and carboxyl group can act as a potential coordination partner, the pentaanion DTPA5- has up to eight free binding sites. Here, DTPA literally wraps around the metal ion. Since some complexes with certain metals require fewer coordination sites, DTPA can bind additional reaction partners even after complexation of metal ions.
Chelates, consisting of gadolinium ions (Gd3+) and DTPA, form extremely strong complexes that are also used intracellularly. For example, complexed Gd ions are used as contrast agents in magnetic resonance imaging (MRI) to enhance contrast imaging. 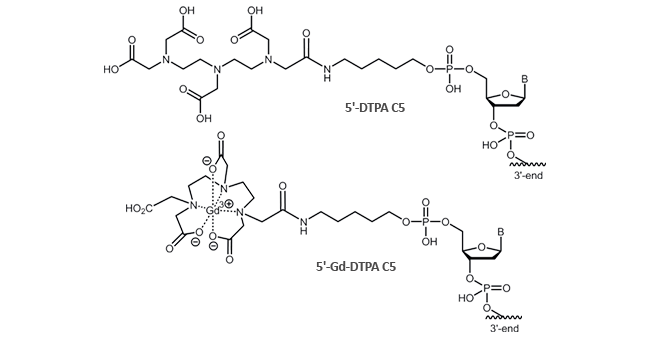 DTPA can be attached to the 5´-terminus of the oligonucleotide. The modification is possible up to a length of
45 bases.

DOTA (1,4,7,10-tetraazacyclododecane-1,4,7,10-tetraacetic acid) contains four acetic acid carboxylate groups on the four nitrogen atoms of its twelve-membered cyclic structure. Similar to DTPA, DOTA is also capable of binding divalent and trivalent metal ions (e.g. gadolinium Gd3+) to form stable chelate complexes. Additionally, after complexation of a metal ion DOTA can also covalently bind proteins and other biomolecules (antibodies, peptides, biotin, etc.) via one of the up to eight binding sites.
Due to its high in vivo and in vitro stability DOTA is used in combination with complexed Gd-ions as a chelating complexing agent in the contrast medium in magnetic resonance imaging (MRI).

The chelator DOTA is available as a 5´-modification to the oligonucleotide. DOTA is bound to the oligo using the click-reactive DBCO. 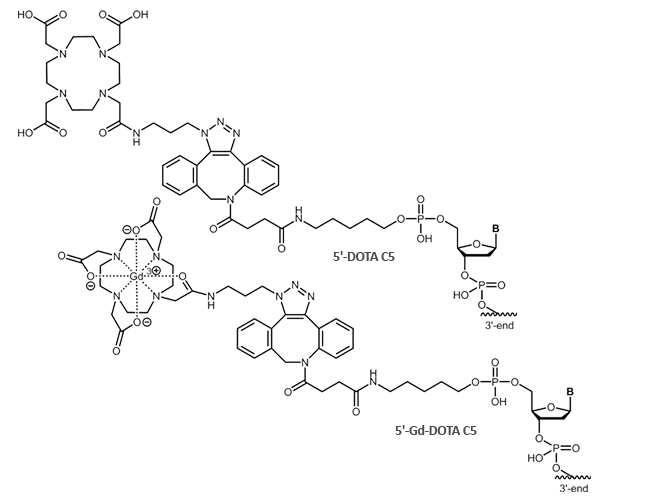 Another representative of the chelating agents is nitrilotriacetic acid (NTA). After complexing divalent metal ions (Ni2+, Cu2+, etc.), NTA has a high affinity for polyhistidine-labelled molecules (e.g. recombinant proteins) and binds them very efficiently. Especially in the field of purification and isolation of recombinant proteins (metal affinity chromatography), this property of the chelating agent NTA is already known.
Coupled to a DNA oligonucleotide, the property of His-tag binding can be exploited to form, for example, DNA-protein conjugates.

The modification NTA is also available in combination with complexed nickel ions (NTA-Ni). NTA and NTA-Ni are linked to an oligo (5´-terminus) using an azide via the copper free click chemistry. 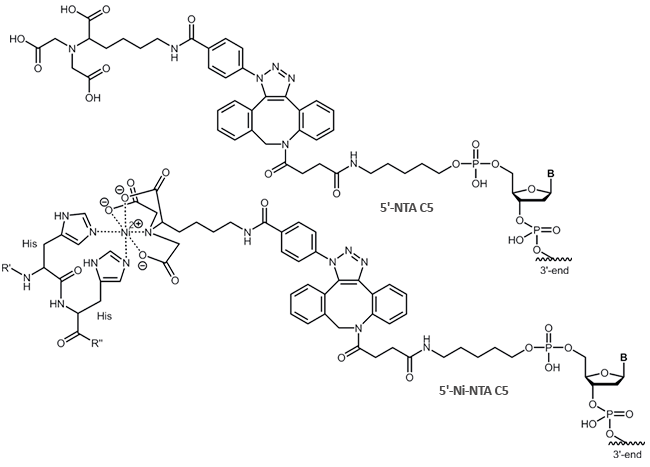