To thoroughly understand the function of a biomolecule, essential evidence comes from the location of the respective molecule and its spatial and timely distribution as well as from knowledge on the interaction with other biomolecules. Yet, addressing these questions is difficult, as the molecules of interest are often very complex and are mostly present in extremely low concentrations. To understand trafficking, further requires to follow the molecules in living cells or organisms. The common approaches to label biomolecules for tracking in a living environment are limited:

These drawbacks are overcome by the advances in "bioorthogonal labelling". Though the basics originate in rather synthetically chemical considerations, life-scientists have recently discovered the possibilities for labelling biomolecules with minimal impact on their function.

The most prominent advantages are:  ​

Fundamental for this progress was the effort of Sharpless to mimic Nature's approach for producing large, complex biomolecules by simple building blocks and a carbon-heteroatom-connection. For his toolbox of simple building blocks with convenient properties, Sharpless established 2001 the term "Click-chemistry" 2, which describes a set of fast and thermodynamically favoured reactions, enabling the efficient and selective linkage of two molecules.

More specifically, the click reaction is a cycloaddition between an azide and an alkyne. Originally, the copper-catalysed azide alkyne cycloaddition (CuAAC) 2 is an improvement of the classical Huisgen cycloaddition.3 In both cases a terminal alkyne reacts with an azide to form a 1,2,3-triazole. In comparison to the original Huisgen reaction, which is very slow, non-regioselective and only works at elevated temperature, the copper-catalysed version is several times faster, runs efficiently at room temperature and selectively gives the 1,4-regioisomer of the triazole.

Both an azide as well as an alkyne-moiety can be easily and reliably attached to an oligonucleotide.

The catalyst copper however is cytotoxic, thus this approach is predominantly used in vitro (for an exception see e.g.: 4 - DelAmo, 2010). On the other side, the reactive groups of azide or alkyne are very small and not present in nature, making this type of reaction very interesting for many approaches.
Further progress was reached by the work of Bertozzi et al.5, avoiding the catalyst copper by using strained cyclooctyne rings to react with azides. The "spring load" within the ring is sufficient to allow a speedy reaction, enabling a non-toxic use in living cells.

This approach was used in several interesting publications (e.g. 6, 7, 8), which performed different techniques to respectively label proteins. Also in the field of Nanobiotechnology, researchers are increasingly interested in these strategies, allowing the application of different functional groups.9

The tetrazine ligation 10,11 or TCO (tetrazine cyclooctene) click reactions describes another method of bioorthogonal reaction. Through cycloaddition reaction, s-tetrazine and trans-cyclooctene are converted into a cyclic alkene with extremely fast reactivity. In this reaction, the tetrazine is the reactive, electron-rich group which can be open-chain or cyclic. With elimination of dinitrogen N2, tetrazine and the substituting group of cyclooctene are linked to an alkene.

Another interesting feature of tetrazine is its ability to quench the fluorescence of several dyes, which is eliminated by the tetrazine ligation with norbonene or cyclooctene.10 This allows to directly and sensitively track the ligation event.12
Both tetrazine and cyclooctene are stable at physiological conditions and due to their comparably small size both modifications are unlikely to interfere significantly with the functionality of biomolecules. The reaction occurs at very low concentrations and is extremely fast, making the tetrazine ligation also an interesting option for in vivo imaging.13

The following clickable modifications are offered by biomers.net:

A reactive 5'-alkine is achieved by coupling of an appropriate cyclohexyl-linker phopshoramidite (1) to the oligonucleotide; for 3'-modification an alkine-prolinol linker (2) is used.
Ethinyl-dU (3), Pyrimidine C8-Alkyne-dU (4) and C8-Alkyne-dC (5) are available for internal oligo modification at the heterocyclic nucleobase. With 2‘-O-Propargyl-RNA building blocks (6), alkine functions at the sugar moiety can be introduced.
Terminal as well as internal azide modifications are introduced by reaction of azidobutyric acid, azido-benzoic acid or azido PEG linkers with amino modified oligos (5'-Aminolink or internal Amino-dT) (7,8,9,10,11,12).

Using copper-free click reactions, there are various cyclooctyne derivatives differing greatly in terms of their reaction kinetics and hydrophility. In addition to the cyclooctyne DBCO (dibenzocyclooctyne), SCO-PEG3 (strained cyclooctyne) is another representative of these cyclooctyne derivatives.
In many environmental conditions (in vitro and in vivo), DBCO (dibenzocyclooctyne) reacts rapidly and selectively with azides forming the corresponding triazole compounds. The copper-free DBCO-azide click chemistry is a good orthogonal strategy compared to conventional coupling reactions, and thus allowing selective multiple labeling of biomolecules. 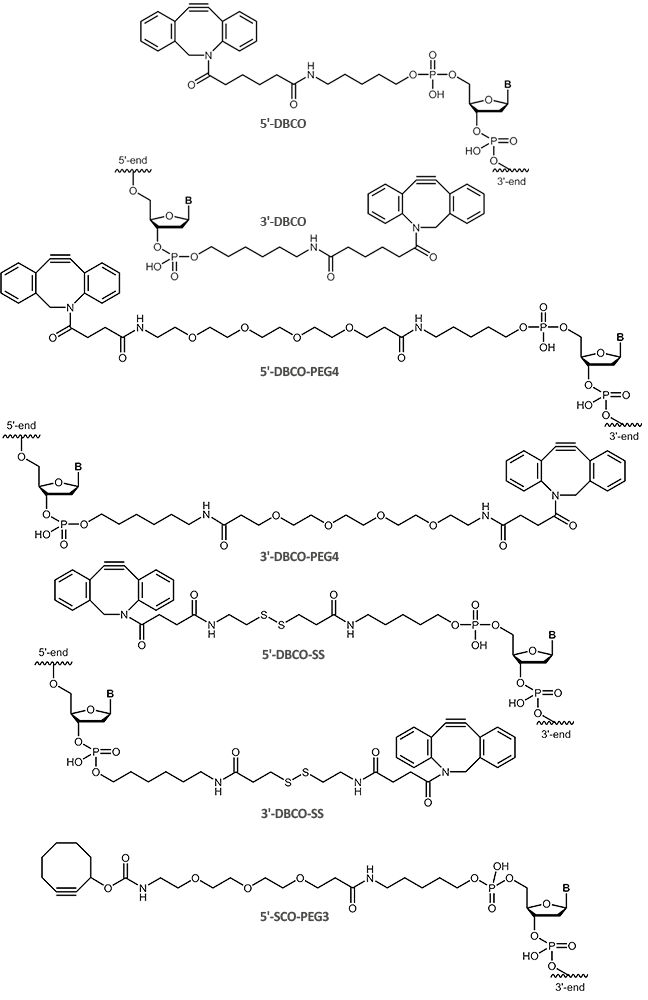 Due to its non-toxic properties, this form of copper-free click variant enables in vivo labelling of cellular DNA or proteins, as well as multiplex labelling. In this way, e.g. lipids or other cellular components can be labelled with special dyes, allowing very high resolution and extended live cell images (3D-confocal or STED microscopy).

For the copper-free tetrazine click ligation, biomers.net offers oligonucleotides with tetrazine, TCO and norbornene as 5'- or 3´-modification: 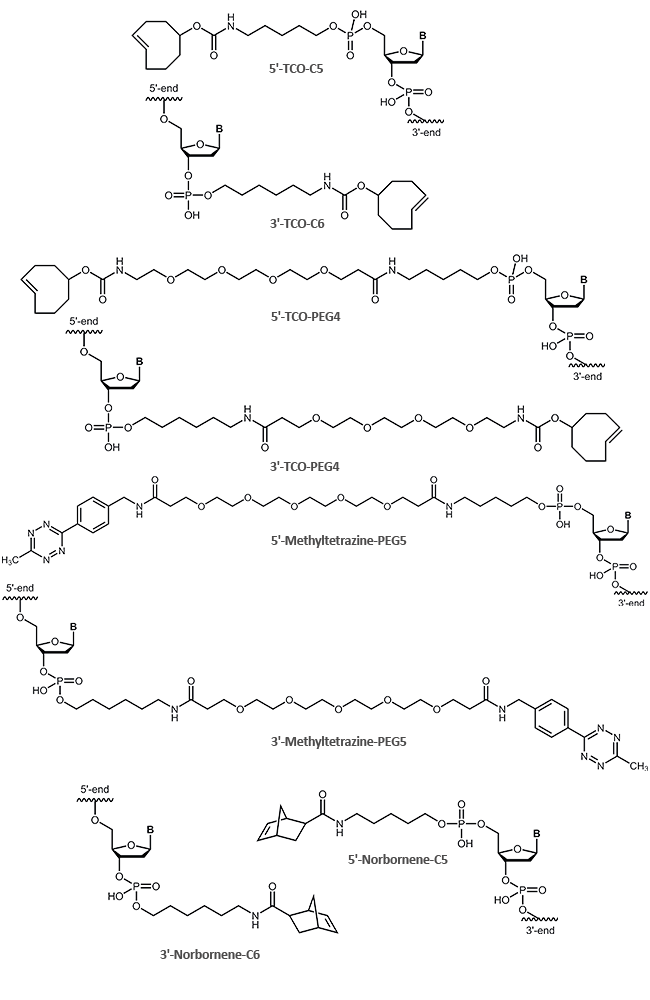