In the field of real-time PCR, a variety of different applications has been developed in recent years. In addition to the classic 5´-nuclease assay (TaqMan), Molecular Beacons, Scorpions, HybProbes, Hybeacons and many other approaches have been successfully established.
Common to all is the measurement of fluorescence increase over time, as well as the need for an individual fluorescently labelled probe (single or in combination with a primer) for each detection.

The new mediator probe PCR (MP PCR) is a highly sensitive, specific and very flexible method. Here, an individual dye-modified component (universal reporter) can be used for many different assays, whereby only the primers and an unlabelled probe (mediator probe) have to be individually designed for the respective detection.

Primers: Like in any other PCR reaction, amplification of the target sequence occurs using two primers. A forward and a reverse primer are created according to the common design criteria.

Mediator probe (MP): The mediator probe is an unlabelled oligonucleotide with a length of approx. 40-50 nucleotides and a blocking modification (MP-Block) at the 3´-end preventing extension during PCR. One part of the sequence (3´-end) is specific for the amplified target, the other part (5´-end) is the mediator, which is compatible to the universal reporter (Figure 1). 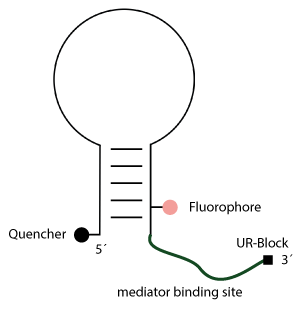 As usual, the desired target sequence is amplified by the primers while the PCR can be monitored by an increase in fluorescence.
For this purpose, the mediator probe hybridises with its specific part to the target sequence. During the amplification step, the dangling mediator is cut off completely by the polymerase. The hybridised specific 3´-part of the mediator probe is digested subsequently, while the polymerase synthesises the complementary strand.

The released mediator can now activate the universal reporter by binding to the single-stranded 3´-region of the UR and being extended by the polymerase activity. As a result, the fluorophore and quencher are separated from each other and the increased fluorescence can be detected.

An enormous advantage over classic real-time PCR applications is the absence of a target-specific fluorescently labelled probe. With the mediator probe PCR the universal reporter can be used in different assays. Only the primers and the unlabelled mediator probe (MP) have to be redesigned.

Multiplexing is also possible by using several universal reporters with appropriately selected fluorescent dyes. The mediator probes are designed so that they can hybridise to the corresponding universal reporter.

The following universal reporters with the corresponding fluorescent dyes are available (the mediator binding region is underlined in each case).
The internal dye is attached either via a dC (7) or dT building block (8).

Attention: The mediator probe itself shall not function as a primer in the actual amplification step and thus be extended. According to this, please be sure to select "MP Block" as a 3´-modification.
For the corresponding Universal Reporter please choose the 3´-modification "UR-Block".

Further information about the mediator probe technology of the Albert-Ludwigs-University Freiburg
can be found here.